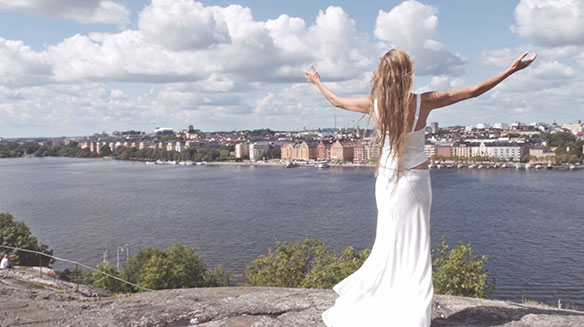 With a big dose of love and gratitude, Therése continues her journey – this time around with Swedish songs.

“Djupet av min själ, which means The depth of my soul, is about trying to find your place in life and be true to yourself after life has taken a new direction”, says Therése Neaimé.

The new songs on her upcoming EP are written straight from the heart, in collaboration between Therése and well known composer Peter Hallström. Playing on the recording you´ll also find some of Sweden’s most renowned musicians such as Peter Hallström,  Per Lindvall, Fredrik Landh and Clas Olofsson.

The song “Djupet av min själ” also comes with a music video filmed in the heart of Stockholm. It´s been directed, filmed and graded by Stefan Lundaahl and edited by Javier V E. Also a special thanks to Hans Montelius at Cinemantrix for guidance and cameo in the video.

“As an artist, and a mother of two, I feel more grounded than ever before. It felt natural to write in my native language this time.  I’ve tried not to censor myself, and the lyrics are more open and personal than on my previous albums”, Therése Neaimé says and sums up her journey when she adds: “I went from being the little girl who wasn’t sure she could really sing, to sharing the stage with the legendary band Simply Red in big arenas across Europe”.

Therése Neaimé is a Swedish artist and composer who have released three albums and several singles on her own record label. She has been in the music industry for more than 15 years and has worked as an artist all over the world.

After 5 successful years in the US, Therése is back in Sweden, but has over the last 8 years, also built a career in the Middle East. With her hit single, “Today is a holiday”, sung in both English and Arabic, Therése has become an established artist in that part of the world.

The single is available on iTunes and Spotify, and your support would mean the world to me.