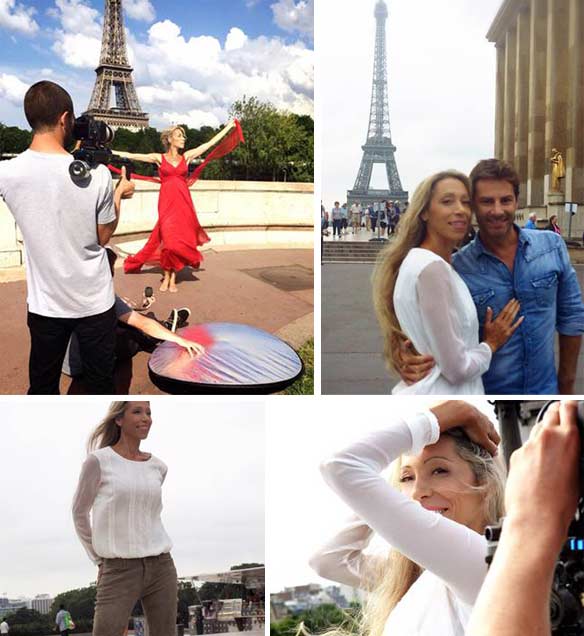 – Sandstorm’s story being deliciously romantic while being profoundly positive. I could not imagine any better place to bring this personal story to life. Paris is just incredible, the vibration there is so unique, says Therése Neaimé.

– Sandstorm symbolizes what happens in our lives while we sometimes have to split from the one we love. It tells the story about the sentimental storm that takes you down in such an intensity that you just think you’ll never go through, says Therése.

Surrounded by a French fashion experienced team, Therése needed this bit of ”French touch” on her new video, putting a pinch of subtility, emotion and romantism, a touch of classiness.

– Cyrille Totozafy, my manager, put together a team with a strong experience in the fashion field (fashion press editorial, cosmetic TV ad and so on). I really loved their vision of my music, and of myself. I felt like a princess and I felt blessed. We were able to mix something simple, reachable with a more emotional, more in depth feel with a main character that is always feminine, strong and stylish, says Therése.

– There is a segment where I was asked to dance a bit in an incredible haute couture dress, reminding my oriental roots. The schedule was pretty tight, but I believe we did an amazing job, I am happy.” she continues.

The story is about a terminating relationship that takes place in the city of Love. Therése plays her own character and Nicolas Roussiau a beautiful French actor, plays her fiancé.

Sandstorm is a new single from Therése Neaimé’s 3rd album of the same name, composed/written by her, Maria Marcus and Niclas Lundin. Therése is one of the most famous Swedish singers in the Middle East, having articles in OK Middle East, Al Saada, Hello Mag, Aviator, Gulf News, L’Officiel, Insider Mag, being the face of Arabian Woman magazine a few years ago.

Therése Neaimé toured the world from Los Angeles to Singapore, Europe and the Middle East. She performed for the troops in Afghanistan and opened for Simply Red on one of their recent European Tours. She has performed for the King and Crown Princess of Sweden and at numerous VIP events.

She was chosen by the Swedish Government as notable personality for the cause of Swedish-Arab relations.

Therese is also the Brand Ambassador for Volkswagen Middle East, Kensington Real Estate and for the Swedish Foundation for Children with Cancer.